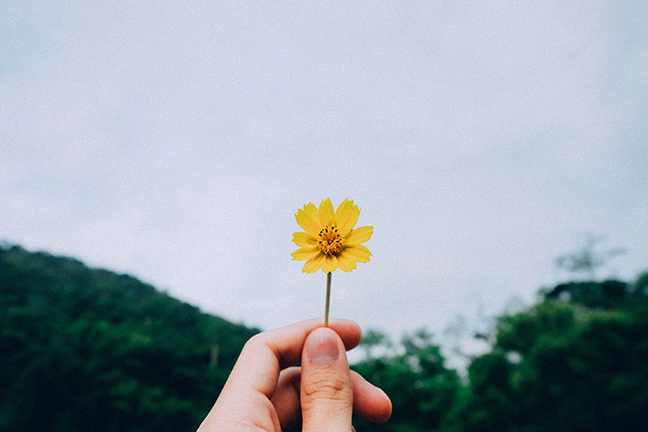 This story is called ‘Remember Your Aim.’ It takes place in Santa Cruz; the year is 1981. My karma yoga task for the day is to typeset the “Wings of Breath” songbook, a compilation of kirtan lyrics that’s being prepared for the satsang. The typesetting equipment is at Babaji’s house, about a half hour’s drive up into the mountains of Bonny Doon. And I am in Santa Cruz, without a car.

But there is a bus that goes within a mile and a half of there, and the bus runs every 2 hours, so I’m game. Even though it’s February and the sky is grey, and temperature is chilly, and the wind is picking up, I’m still game. Typesetting is my gig, and who turns down a chance to visit Babaji’s house?

Of course, no one will be home. Ma has driven Babaji to MMC for the day and she won’t be home until mid-afternoon. But they’ve trusted me with the location of the key (underneath the mat in front of the front door, for heaven’s sake!), so I bundle up, hop on the bus, walk the mile and a half up hill to their house, and let myself in.

The house is heated with wood, and because there’s no one there, there’s no fire going, so the house is chilly, but still, workable. So I set to work with the typesetting. After a couple of hours I made a cup of tea to warm up my finger-tips as well as clear the brain. It’s painstaking work – typesetting – so it was slow going, but I carried on.

Around noon, the rain started, lightly at first. And sometime later, Ma came home with the groceries; we greeted one another, and I began to pack up so I could catch the 4:00 bus down the hill. The next one wouldn’t come until 6:00 and that’s after dark in February; with the rain coming on stronger, I wasn’t looking forward to the walk to the bus stop in the rain.

As I was packing up, Ma came in to the work room and offered me a ride to the bus. My heart burst with gratitude; not only would I not have to walk in the rain, but I’d get to sit in Babaji’s seat in Ma’s car. What a great blessing!!

Driving down the hill, Ma and I chatted; she was always a gracious conversationalist and when she asked me something about my life, and I opened up and told her some troubles or other (the details have long since fled), and we continued our chat as we waited for the bus to arrive. I must have been sharing some difficulty with her, for she said, sort of out of the blue, “Remember your aim, Pratibha, remember your aim.”

Just then, the bus appeared in view from around the curve, so I gathered my things, gushed thanks so much for the ride, and headed out into the rain. She waved goodbye as I stepped onto the bus, and whoosh, our ways parted.

But her words ‘remember your aim’ resounded in my mind. Around and around they revolved, all the way down the hill, past the fire station, around the curves, through the tunnel of trees, over the bridge, as I pondered, ‘well, what is my aim?’ “Do I have an aim?” Not really, I thought. Life seems to simply amble along; stuff happens; then some other stuff happens. “Does a person need an aim?” “Do other people have aims?” “Why don’t I have an aim?” You all know the kinds of questions that the mind ask when something seems puzzling!

And then one morning, instead of concentrating on my one-pointed meditation, a memory popped into the mind. A memory of the first Dharma Sara yoga retreat at Oyama, back in 1976. (It was the second retreat, actually; the first one had taken place at White Rock the year before.) Babaji was sitting on the dock in Lake Osoyus. He’d just completed an interview with a group from New Directions magazine, based in Vancouver. I hadn’t been invited to the interview, but happened by to listen in (and just to be near him) and no one had asked me to leave!

They’d asked Babaji the usual questions about his background in India, about why he’d come to America, about yoga and meditation, about life in the world. As they were packing up their equipment, I crept closer and found the courage to ask, “Babaji, if you had only 2 words to say to the people of the world, what would they be?” He glanced at me, looked down at his chalkboard, paused only a moment and wrote, “Attain Peace.”