I spent many weeks this winter marvelling at the beauty of the land in its quieter season.  The grasses, flattened by cold and snow, and the trees, barren of leaves, leave the contours of the land to plain viewing, and they carry a magic that whispers of adventures to come.  And so the arrival of warmer weather comes with an excitement and a realization that there is much to do. 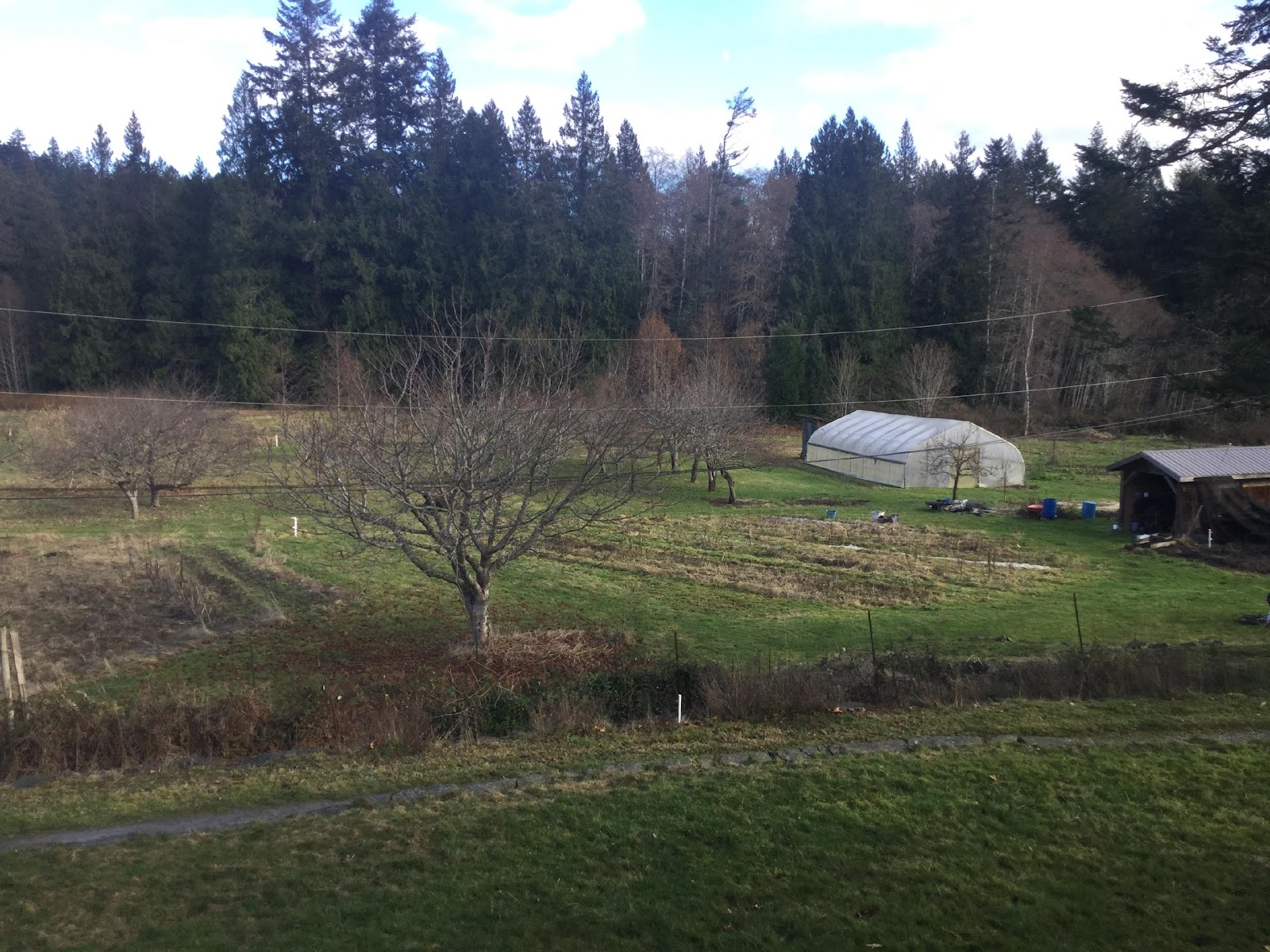 At the moment, that means preparing beds and planting out the seedlings in the fresh air and sun after their month and a half indoors.  More on all that in a minute, because as I sit down to write, the glorious strains of Joni Mitchell’s song, “Woodstock,” are wafting through my mind with their striking exhortation that “we’ve got to get ourselves back to the garden,” and I think it deserves a mention. The years that incubated this song – this “time of man,” as the song says – were a crucible of spiritual awakening in western culture, and critical to the formation of our wonderful yoga community.  Many people don’t realize that Woodstock itself was formally opened by Swami Satcidananda, at one point saying “So, let all our actions, and all our arts, express Yoga. Through that sacred art of music, let us find peace that will pervade all over the globe.”  He also led the *massive* crowd in chants of Hari Om and Ram to get the festival underway.  Joni released the song about it in 1970 (the same year the early version of Ram Dass’ Be Here Now was released, which contained Babaji’s picture and some stories), and then a year later, Babaji arrived in the U.S.

The song reminds me of how many of the early devotees met:  “I came upon a child of God, he was walking along the road… going to camp out on the land and get his soul free.”  Sound familiar?  Then she says, “Then can I walk beside you?  I have come here to lose the smog, And I feel to be a cog in something turning.”  There is this call to rehumanization – together; a call echoed by the yoga masters that serious practice can take place somewhat away from the hubbub of the cities.  There is a sense that the smog of industry is turning us into machines, and that “I don’t know who I am.”

And then come the teachings.

“We are stardust…”  Reminds me of the teaching of the gunas: we are not what we think we are.
“We are golden…”  There is a divine radiance and value inherent in our being.

Then – potently and surprisingly –
“And we’ve got to get ourselves back to the garden.” 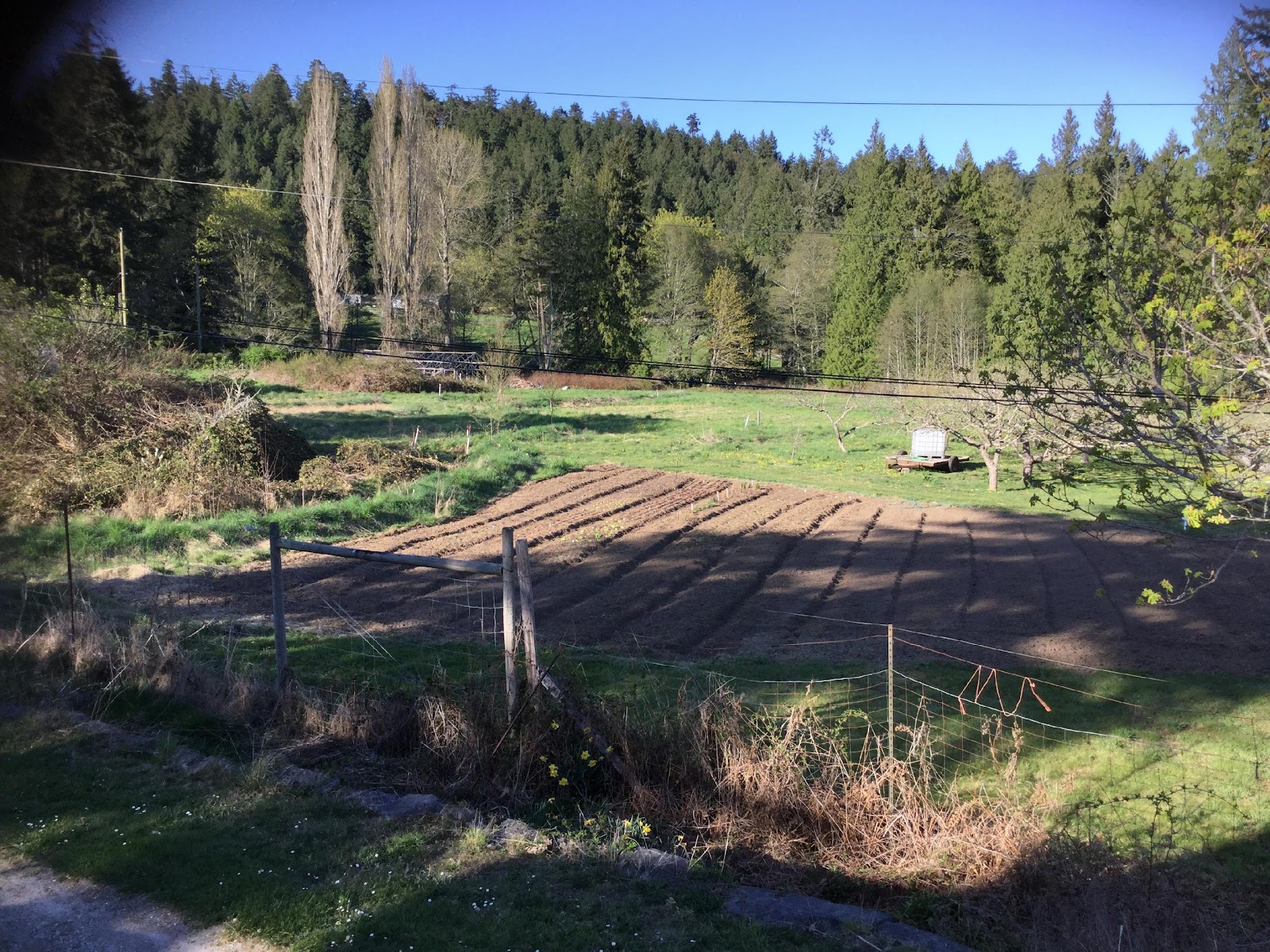 Jump ahead now to 1981, after a decade of devotion and practice, and after a successful mission to “buy land” as Babaji had instructed – at last, a cluster of devotees were gathered at the feet of their Guru on Salt Spring.  In a recent telling of the story, Anuradha spoke of the absolute bliss they were feeling as they sat with him under the Maple tree on the mound.  They had made it!  “At long last, we had our Guru, had our land,” and all was right in the world.  Anuradha shared that she imagined (and hoped!) that moment would carry on forever, but, quite quickly, Babaji sprang to his feet, grabbed an iron bar, and promptly disappeared into a massive blackberry patch on the east side of the barn and began clearing the space in preparation of the first garden site. He was leading what was to be the first group act of Karma Yoga of thousands to come on the land.

I suggest it’s no coincidence that his first act was to begin the process of growing food.  Babaji is robustly clear in his leadership.  The world is for action and wise stewardship.  The ownership of land, then, comes with opportunities and responsibilities.  He spoke very often about the priority and possibilities of gardening or farming on the land.  And in his commentary on the Gita, alongside a correct and flourishing relationship with the flora and fauna of nature, he points out that growing food is considered an “obligatory duty” for human beings. 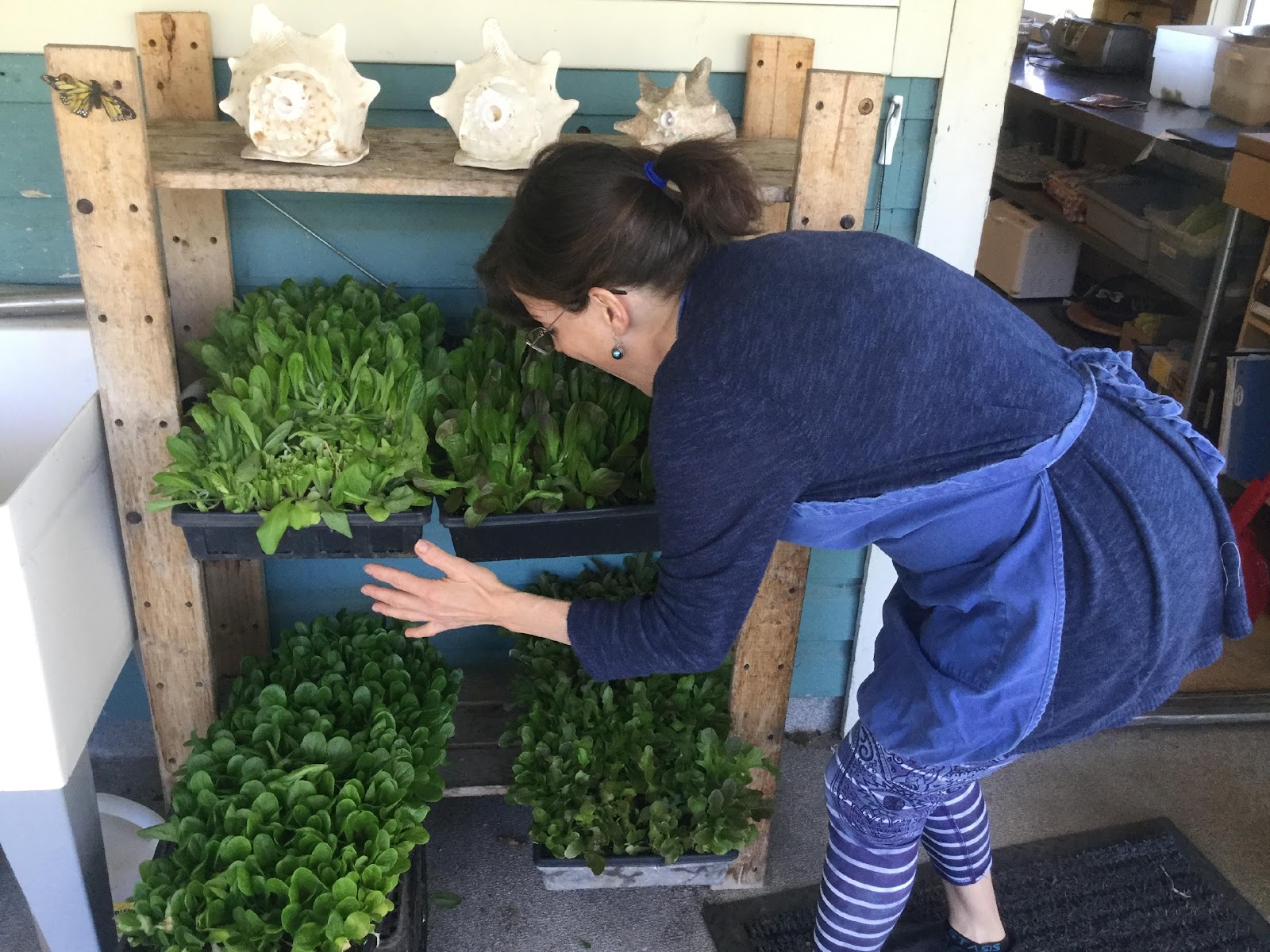 The early Satsang always held the garden in prominent place, with folks like S.N. and Mahesh establishing greenhouses, fencing, and irrigation; and procuring and maintaining tractors.  Organic gardening in the community got a solid mention in Raghunath’s introduction of the first Salt Spring Centre cookbook.  And while there was certainly a fluid cast of characters pitching in in various ways, Dan Jason and Bhavani were stand out devotees of nitty gritty plant cultivation, with Dan himself sticking it out, with some sojourns, until this very date forty years later!  Rajani leaned in as a garden enthusiast, notably helping establish the orchard with Rajesh, who went on to develop a cut flower operation with Bonnie.  And then there have been the hundreds of us, pitching in where we can… digging, weeding, watering, carrying a box of kale or lettuce from here to there, harvesting, and repairing and supporting the infrastructure.

The more I’ve been talking about this with people, the more I see how, like a body, all of us and all the systems of the Centre are involved and interconnected.  So what does it mean for us to “get ourselves back to the garden?”   And why would Joni Mitchell muse about this so strongly as the direction for us to go?

Babaji said, “my only aim is to bring people into sadhana,” and so for us getting ourselves back to the garden must be an expression of that. 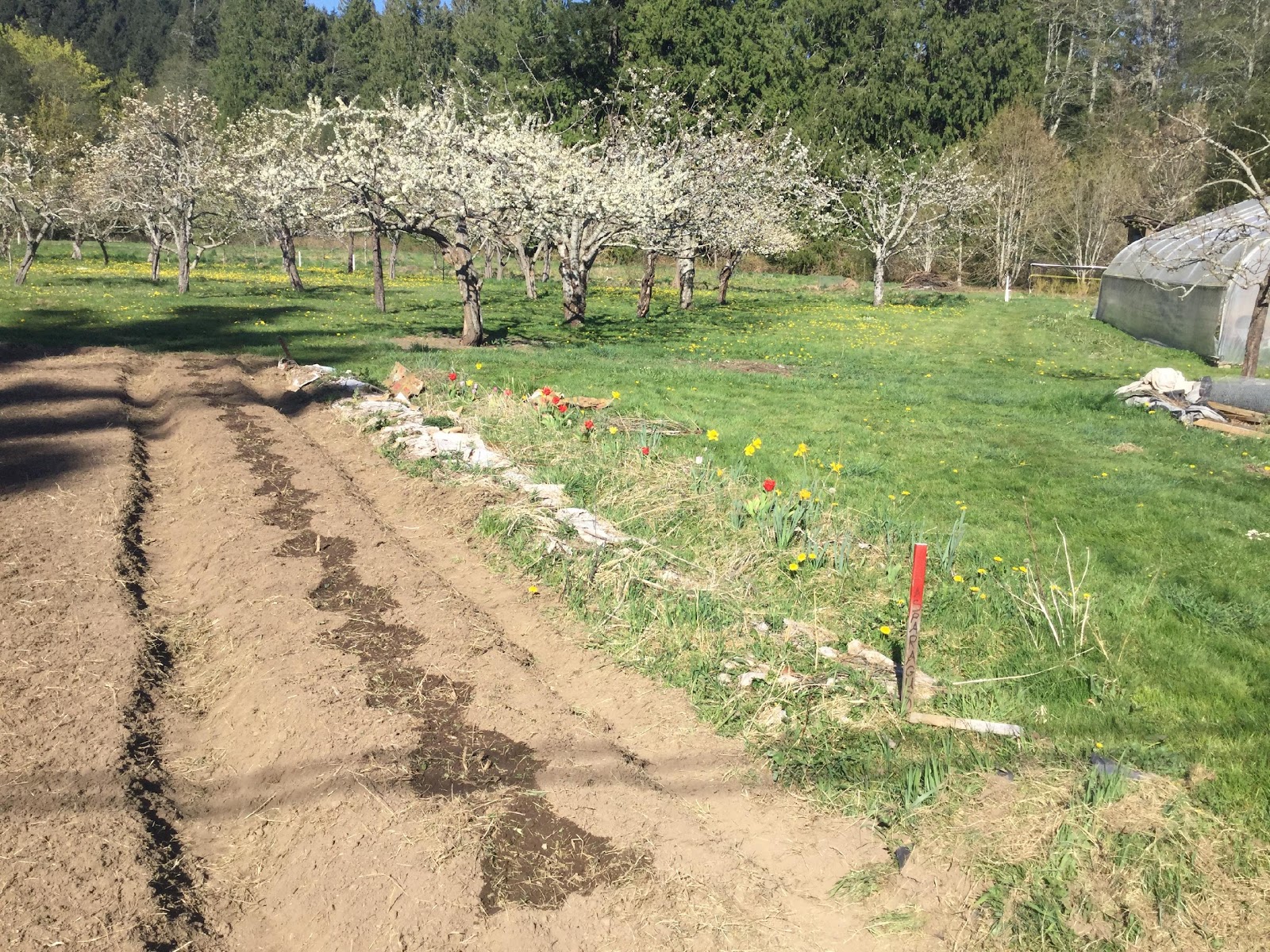 Chanting kirtan, trust in God, the beauty of wholesome work done selflessly, and the rapture of deep understanding can be something of a garden of eden in themselves.  Indeed, some speak of their practice of meditation or asana as a refuge and a place of order.  And it can seem simple, “Just sit on a cushion and find your breathing.”  But without exception, everyone also admits that steps forward in the dharma set us up for work… inner work, healing work, purificational work, interpersonal work, service work.  To be in a body comes with obligatory duties.  And they must be met with a brave heart.  If we are to re-humanize, if we are to “get our soul free,” if we are to do something about feeling like a “cog in something turning,” then the effort must be ours.

On another level, Babaji does, as I’ve said, suggest that growing food is a duty, and to make it an expression of sadhana, we would do that duty in a selfless or non-attached way, without “seeking the fruit.” How we can support this process in our lives is something to consider.  Perhaps it’s to advocate for protection of agricultural land reserves or good city composting.  Perhaps it’s to volunteer for the local farmer’s market.  Perhaps it’s to dig a little 4 x 4 bed and grow some kale in the backyard.  Perhaps it’s to go for walks in green spaces and truly appreciate their existence.

Or perhaps, (and I highly recommend this one) it is to help out a friend with their garden: digging, weeding, watering, tidying up, carrying soil from here to there. It is about leaning ever more deeply into a life of virtue and meaning… into a correct relationship with the world and nature.  It must mean to be in service of, as Charles Eisenstein would say, “the more beautiful world our hearts know is possible” – a world we have glimpsed with Babaji, and that we intuit is at the heart of our practice.

The emphasis on “getting ourselves back” mirrors Babaji’s teaching that the “Guru can cook for you but can’t eat for you.” We have to DO it.   Babaji’s insistence on regular effort and aspiration is all too clear.

For me and the cast of characters on the land at the moment, getting back to the garden also means literally just that.   At the farmstand, Anuradha and Marion are currently facilitating the sale of some of the seedlings we have grown over the past many weeks.  Dan Jason has been here regularly, and recently facilitated a new bed for herbs and medicinal plants.  As I write, Santosh is out in the flower field shaping beds and putting in some dahlias.  Suneel has been super busy as a garden infrastructure angel, reopening the irrigation systems and doing an overhaul of one of the gates.  Om Prakash and Rajani have just recently finished a push to tame some of the blackberry patches, replace the blueberry netting and make the arboretum (put together by Dan Jason and S.N.) more accessible.  Noelle has been helping in the greenhouse incorporating fresh spring greens from the greenhouse into the kitchen. And thanks to great enthusiasm and support from Sharada, we managed to come through with a new tiller, which has allowed me to open up some beds, both for us and for the school kids, to engage the process of getting our seedlings planted.

Stewardship of the land, and of the activities which take place on it, takes all of us.  In following Babaji’s leadership and teaching, everyone has their part to play in supporting this environment for the attainment of peace.  Wishing you success in Sadhana – success in getting “back to the Garden.”

P.S.:  What is a standout memory for you of the Garden at the centre?  I would love to hear it in the comments below! 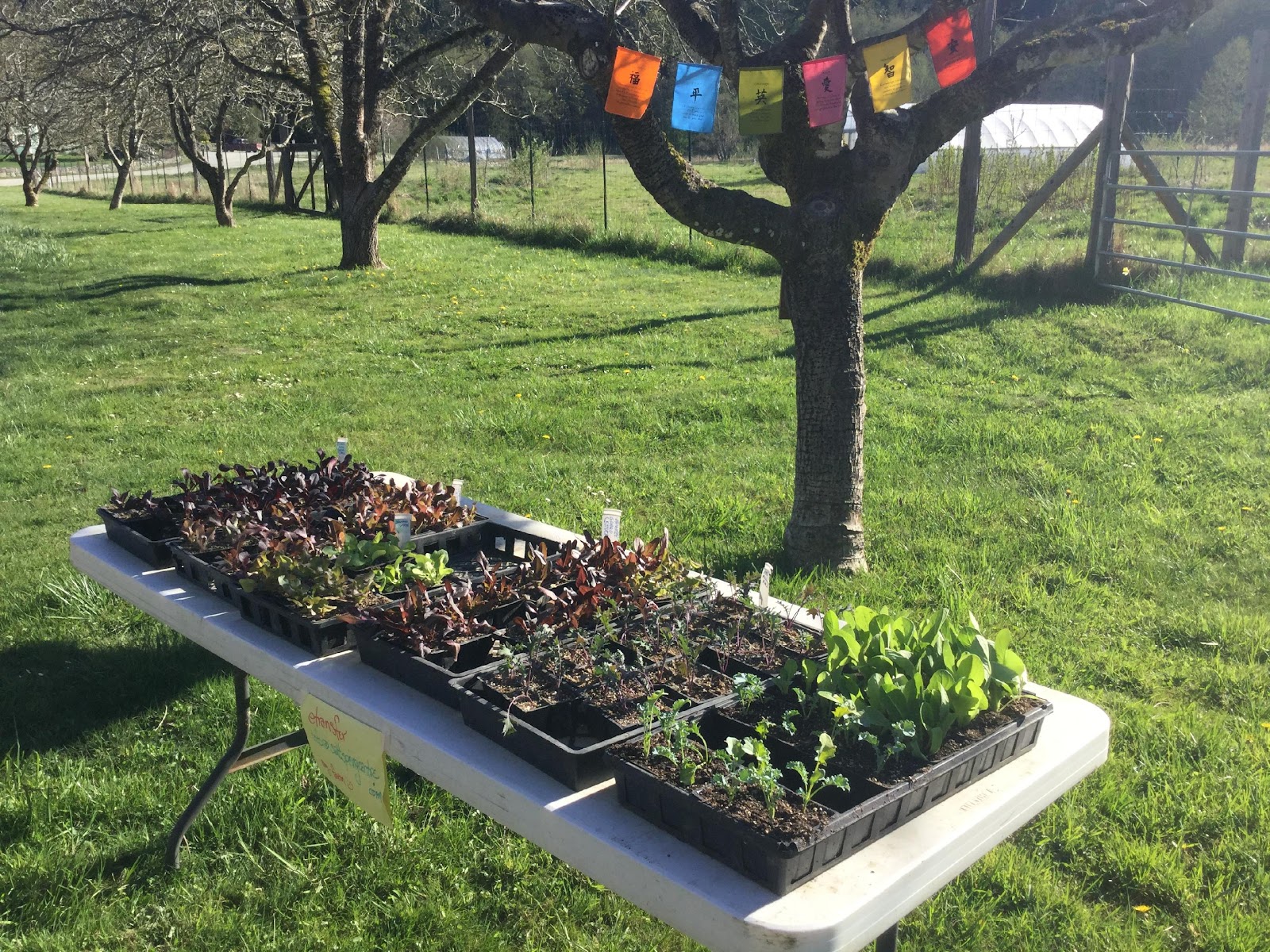 Seedlings at the farmstand 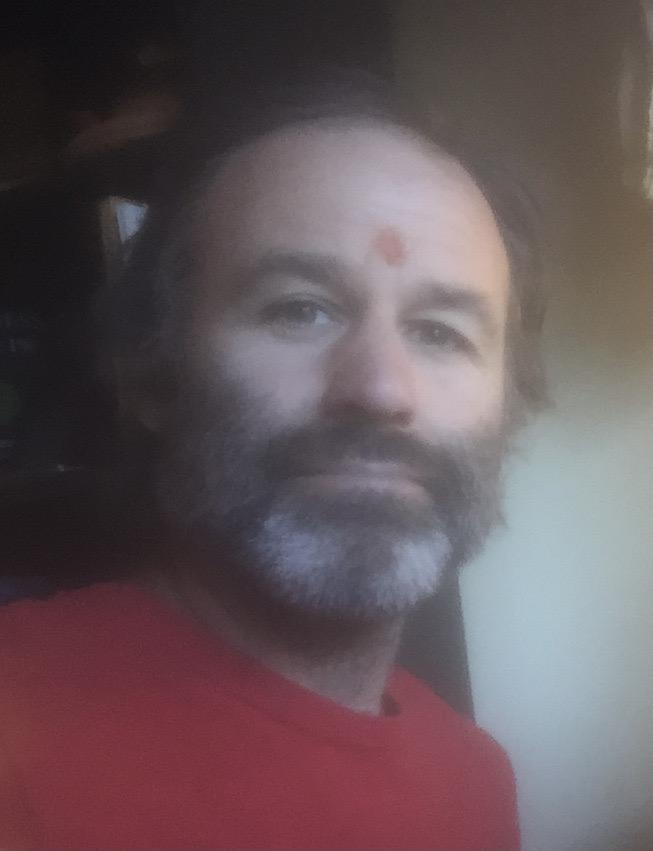 Thanks to Babaji and the Satsang, I’ve been an aspirant turned devotee of Babaji’s for 17 years.  Currently I’m living on the land at Salt Spring, happy to be helping curate our “environment for the attainment of peace.”