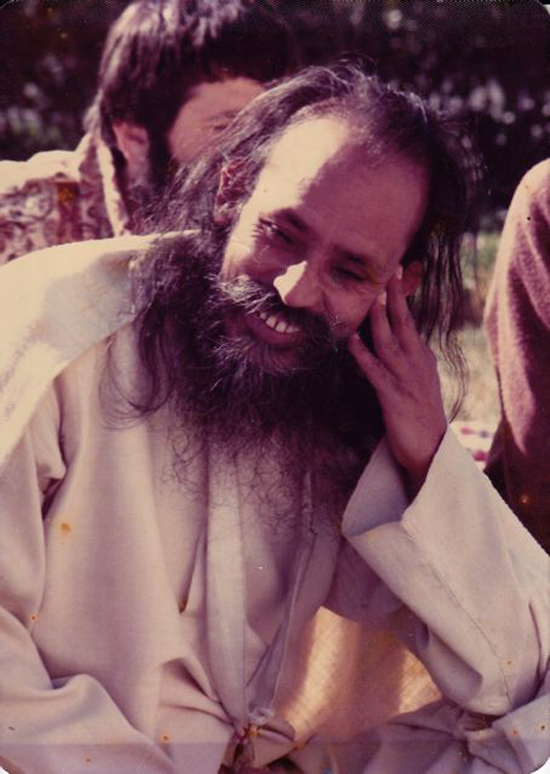 Ten years ago, just as I was trying to figure out who and how to be in the world as both a spiritual aspirant and an adult, I found out I was pregnant with my first child. Sure, I’d been broody for years, but my partner and I were relatively young, living far away from family and friends, and I had recently been seriously contemplating a spiritual life of renunciation. So I turned to ‘The Yellow Book’, an early compilation of Babaji’s teachings, conveniently unbound, to find a few pages I could keep with me for guidance. These are the four I chose:

‘Be your children’s servant.’

‘Children being born now need to be around people with open hearts.’

‘All babies are yogis.’ Because their chitts have less thoughts. They are in their purest form and the light of God shines in them.

Just these four pages were enough at the time to assure me that raising children was a potent form of spiritual practice. But by serving my children selflessly (karma yoga), with an open heart of devotion (bhakti yoga), while living in intentional community (family), I was also renouncing the outer world in a sense, becoming the world for my children. As each year passed their world grew bigger and my role within and without my family began to change. I needed to understand what the practice of householder yoga really meant, why it was considered so difficult, and how ‘to live alone among people and be in desires without desires’.

Babaji doesn’t just make this stuff up – so I did some research. As in, I typed ‘householder yoga’ in to Wikipedia and this is what I found:

In ancient India there developed a Hindu system of ashramas (life stages) that helped guide one in living in accordance with one’s Dharma; ‘something essential to completing the full development of a human being and fulfilling all the needs of the individual and society’. (Wikipedia)

Divided roughly into 25 years, the first stage was called Bramacharya (bachelor/student), the second Grihastha (householder), the third Vanaprastha (forest dweller/retired) and finally Sanayasin (renunciate). It was acknowledged that the second stage, Grihastha, was most important because by leading a virtuous life, contributing positively and materially to society, and raising and educating children to continue humankind, one supported everyone within the other three life stages. In turn, this phase was considered the most challenging for spiritual aspirants because it was ‘where the most intense physical, sexual, emotional, occupational, social and material attachments exist in a human being’s life.'(Wikipedia)

It was noted that the system was set in place to avoid mass renunciation and the breakdown of society, but there were exceptions. Those who experienced complete dispassion towards the world during the student stage could go straight to renunciation (like Babaji). But for the rest of us, the hard work of spiritual sadhana (practice) was, and very much still is, to be found while ‘being in the world but not of it’.

I found a helpful passage in Between Pleasure and Pain, written by devotees of Babaji, based on his teachings.

“Marriage invariably means family life and all the financial responsibilities that go along with it. We have to earn a living and provide ourselves and our families with the necessities of life. But how do work and family responsibilities fit in with spiritual life? Don’t all the traditional teachings say that we have to renounce worldly possessions? Is this to be taken literally? If not, what is renunciation?

Renunciation is something other and much deeper than the mere physical act of giving away one’s car, television set, and stereo, etc., and going away to live in a cave in the Himalayas. Renunciation has virtually nothing to do with physical possessions. It is strictly a state of mind. Renunciation for householders means living in the world without becoming bound and obsessed by it. And worldliness, the opposite of renunciation, is only attachment to sense objects and sense experiences, and not the objects or experiences themselves. Work and household responsibilities are perfectly compatible with spiritual life. Our attitude alone determines whether our lives are “spiritual” or “worldly”. In fact, considering our culture and our needs, household life is undoubtedly the most viable approach to sadhana for most of us.

…Work done begrudgingly and work that becomes an obsession are both forms of ego indulgence and create more attachments and a greater sense of separation. Work that is done willingly, responsibly, and with pure motives is a very high form of sadhana- karma yoga.” (Between Pleasure and Pain)

…and from Silence Speaks…

Q: Is solitude preferable to being a householder?
B: No, but a householder sometimes needs solitude to see him or herself from a different angle.
Q: Is a householder’s progress slower?
B: Progress depends upon your honesty. A sadhu (renunciate) can be much slower in sadhana than a householder if there is not honesty in sadhana.
No one can have everything. We gain something and we lose something. In this way life goes on. Without developing the qualities of tolerance, compassion and contentment we can’t live together and can’t love each other. A married couple should sacrifice their personal desires and row their boat together. Negativity is not unusual; it exists in everyone. But we have to overpower these negative things by watching the mind.

There is no peace if there is no limitation of desires. We create problems mostly by our own dissatisfactions. No one can be happy all the time. Sometimes we get sad and depressed, and at that time our sadness projects onto the people around us, which creates problems or dissatisfaction. I have not seen any householders who can say that they have no problems. I can’t say that householders can eliminate all problems, but they can reduce the emotional strain by understanding the real situation.

…and a final word from Everyday Peace…

…Money has its place in life. It’s not the most important thing to have money. With lots of money you can’t eat more than the capacity of your stomach. You can’t wear several sets of clothes. You can’t ride in three or four cars at the same time. Money gives material satisfaction and at the same time dissatisfaction. But you need money to pay your family expenses.
The most important thing is peace. Without peace one can’t get contentment. Without contentment life is unhappy and miserable.

…We are in the world. We have to desire things we need. But in desiring the world we should also desire to get out of the world.
Sadhana is very important. It does not matter what sadhana you do. The important thing is to do it regularly.

Wish you all happy together.

I get the sense that all of Babaji’s teachings are for householder yogis. Over and over again he reiterates that limiting desires is an important part of the path and that regular sadhana supports this aim. The yoga of parenthood continues for me to be a practice of devotion and selfless service, and, as I venture into the wider world of livelihood and community engagement, these practices continue to challenge and guide me. Babaji writes of karma yoga- “Work without devotion is sand” which flows seamlessly into bhakti yoga- “True love is untouched by desire and attachment” “Love is always there when you are not hating”.

Kenzie Pattillo completed her 200 hour YTT at SSCY in 2002. She is a householder yogi/mama living in North Vancouver and currently teaches hatha, yin and restorative yoga in her community and at yoga getaways at the Centre.

As an E-RYT 200, and having recently completed her 500 hour YTT through Semperviva Yoga College, she looks forward to joining the YTT asana faculty this summer at SSCY.